Weekly insights from an Entreprenuer: To spend one year as a tiger is better than to live forever as sheep

How to make your ideas stick

I’ve been a PM (Program manager) for the core of my career and one of the things that comes with the job is figuring out how to make things sticky. (Picture is of a glue truck that fell over and dumped it’s load everywhere haha) 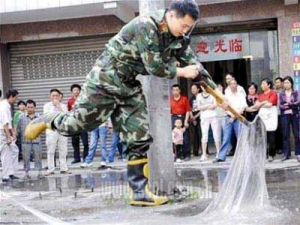 That’s why I was so excited when I ran into this interview from the book “Made to Stick” that explores why ideas stick: http://blog.guykawasaki.com/2007/01/the_stickiness_.html.  There’s some concepts that hit me really hard and I wanted to share because I think it’s super applicable to any startup trying to wrestle with bringing their idea to market.

1) Abstraction makes a great Computer Scientist.  Concreteness makes a great Communicator.
When you’re building a site for millions of average joes, it’s better to be concrete than to be computer scientists.

“Make people play on your turf by keeping things concrete. It is so much easier to bullshit with abstraction than with concrete examples. Don’t say, “I think we should devote more resources to evangelism among mid-market IT decision-makers.” Say, “Here’s a list of 500 IT decision-makers in the area around Salt Lake City. I want to invite them to a one-day conference on Sept 29. It will cost $60,000 to pull off. Who’s in?” Even if they disagree, it will be productive disagreement, anchored in reality.”

2) We are way too smart for our own good.  Our messaging needs to be dead simple.
Read the southwest airline napkin passage.  Here’s an excerpt:

“The Curse of Knowledge. Lots of research in economics and psychology shows that when we know something, it becomes hard for us to imagine not knowing it. As a result, we become lousy communicators. Think of a lawyer who can’t give you a straight, comprehensible answer to a legal question. His vast knowledge and experience renders him unable to fathom how little you know. So when he talks to you, he talks in abstractions that you can’t follow. And we’re all like the lawyer in our own domain of expertise.”

This is something I learned from a very wise adviser of mine.  When you’re in Vegas, the way to win big is not to split up $100 and make $10 bets here, and there.  That’ll just mean you lose some and win some and end up in the best case, with what you started with.  Take that $100 and make that one big bet.  If you win, you win big.  If you lose, it’s time to raise more money.

I know every entrepreneur can communicate their idea fifty different ways that sound good.  That’ll never work.  Put down the $100 bet.  Know your one core marketing message.  And stick to it.  Trust me, it’ll be much more compelling.

“Most entrepreneurs struggle for years to find a core message, but Kelleher started with his.  <snip-Just go read the section> Lots of entrepreneurs can tell you a dozen reasons that their product or service will transform the world. A good challenge for them would be to sort through the dozen reasons and pick the single most important one. It’s a worthy aspiration to paint a picture of the world that is simple enough and concrete enough to be sketched on a cocktail napkin.”

Just wanted to encourage all you startup peeps to mold your ideas/concepts into something that is plain dead simple.  Our else they won’t stick.  Now go read the interview, it’s very good.

Entrepreneurship ideas, Startup, sticky
← Comcast. Not Comcastic. Score: -32 Why you need a Co-Founder →

Hi, my name is Brian Ma - cofounder at Decide.com. This blog is dedicated to you, the aspiring entrepreneur or the curious startup hobbyist. I hope that my mistakes, challenges and triumphs will help you one day realize your dreams to really change the world.
If you're new to this blog, I'd suggest starting by clicking on this link.